Rethinking the narratives of mass incarceration

This story was originally published by UChicago News. Read the article on their site here.

As an eighth-grader in Marysville, Ohio, she attended class in the shadow of mass incarceration. Down the street from her middle school is the Ohio Reformatory for Women, a state prison built on 260 acres of land. When it opened in 1916, it held 34 women. It now incarcerates more than 2,000.

“The idea of prison was always looming,” said Adeoye, now a second-year College student at the University of Chicago.

That was one reason why she was eager to enroll in “Narrating Social Change,” a course taught this spring by UChicago scholars Cathy Cohen and Alice Kim. For Adeoye, the criminal justice system had always felt close, but the aspiring attorney wanted to see it for herself—to learn from those who knew of its conditions firsthand.

The idea for the course first took root in 2018, when Kim joined UChicago’s Pozen Family Center for Human Rights. As the director of human rights practice, she launched a lab focused on engaging students and community members in solutions to the crisis of mass incarceration. Her vision included a mixed-enrollment course, one in which College undergrads and incarcerated students would learn alongside one another at Stateville Correctional Center in Crest Hill, Illinois.

Both she and Cohen, the David and Mary Winton Green Distinguished Service Professor of Political Science, had already taught classes at Stateville with the Prison + Neighborhood Arts Project (PNAP)—which made them a natural fit to co-teach this first-of-its-kind course.

They had originally designed the course in partnership with PNAP’s University Without Walls (UWW) bachelor’s degree program at Stateville. Eight UChicago students and eight UWW students were set to take part in a quarter of learning, dialogue and knowledge-building with weekly classes at the prison. When the coronavirus pandemic made those visits impossible, they found an alternative: opening their virtual classroom to two formerly incarcerated students.

Exploring narratives of struggle against oppression, the syllabus focuses on a carceral system that disproportionately impacts black Americans.

“There’s been a deep engagement with the assigned texts and a continuing commitment to center the ‘inside’ students who are missing at this moment from our class,” Cohen said. “For me, it’s been one of the most delightful teaching experiences I’ve had.” 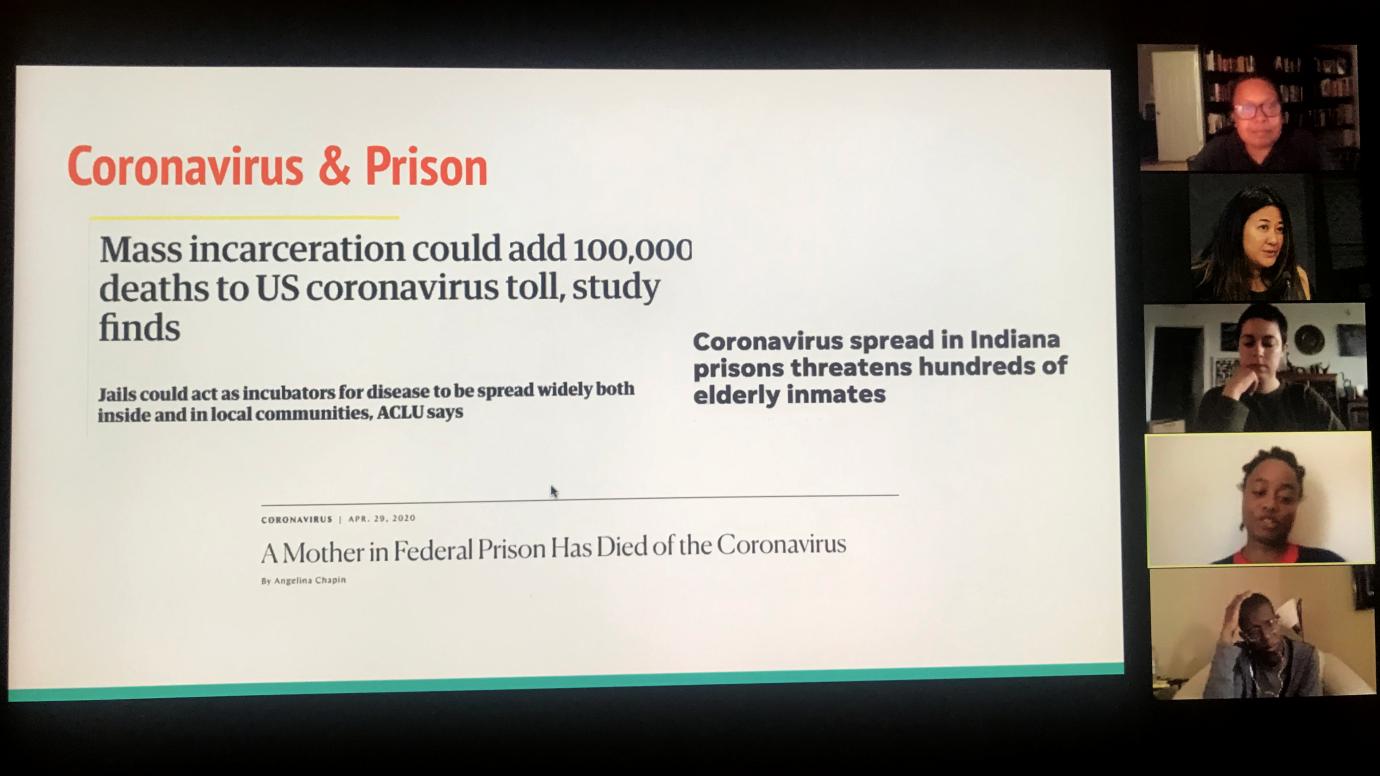 Part of "Narrating Social Change" focused on the spread of COVID-19 in prisons. In addition to course readings and discussions, students raised money to buy soap for incarcerated people.

A leading scholar of race and politics, Cohen is the founder of the GenForward Research Project, which collects quantitative and qualitative data on the political attitudes of young adults, especially those of color. She has also been politically active in a range of organizations, working on issues from black feminism to HIV/AIDS to lesbian, gay and queer rights. Kim, a longtime justice activist and cultural organizer, leads PNAP’s community building efforts and facilitates a think tank at Stateville examining sentencing practices and criminal justice reform in Illinois and nationwide.

Kim said their hope is to foster conversations about incarceration as “something that’s real and affects every single one of our lives,” rather than a faraway abstract concept. “Narrating Social Change” marks an effort to not only raise the visibility of such issues on campus, but to create space for students, faculty and staff whose families and communities have been impacted by the carceral system.

Over nine weeks, the class studied the works of writers like James Baldwin, Angela Davis and Audre Lorde, and hosted guest speakers such as filmmaker Grace Lee, performance artist Anna Martine Whitehead, and visual and sound artist Damon Locks. Included on the syllabus was “The Long Term,” a hand-drawn animation developed by incarcerated artists in PNAP classes taught by Locks and artist Sarah Ross.

For Eric Blackmon, a student who spent nearly two decades in prison before his murder conviction was overturned, a letter that Baldwin wrote to Davis felt especially poignant. “He highlights the fact that it’s not by chance the criminal justice system works the way that it does,” Blackmon said. “It works in exactly the way it was ultimately designed.”

In addition to course readings and discussions, Blackmon, Adeoye and their fellow students worked on a mutual aid project, raising money to buy soap for people incarcerated in COVID-19 hotspots. The students also assembled a course package to help students at Stateville engage with the same curriculum.

“Reorganizing for a remote online course compelled us to think capaciously about what it is we want to do, and how to be creative in this moment,” said Kim, a lab director at the Pozen Family Center for Human Rights. “How do we build community when we’re not in a classroom together, when we’re not going to the prison together?”

The existence of the course also poses fundamental questions about the responsibility that universities hold as neighbors. Cohen stressed that a mission of partnership with surrounding communities must necessarily include educational opportunity—both for current residents, and for those who were swept up in a broad system of incarceration.

“Sometimes, the communities that surround this campus become subjects of study, but aren’t understood to be partners and places of asset and growth,” she said. “We forget the people who are there, their stories, their insights and their brilliance.”

One such story belongs to Blackmon. While incarcerated, he enrolled in PNAP courses, including some with Kim. He also enrolled in correspondence courses and gained certification as a paralegal. Collecting evidence toward his own exoneration, he eventually won a hearing in the 7th U.S. Circuit Court of Appeals. In January 2019, prosecutors dropped all charges against him.

Now a paralegal at the MacArthur Justice Center, Blackmon is just a few credits shy of a degree from Northeastern Illinois University. He plans to apply to law school.

The course credit he earned from “Narrating Social Change” moves Blackmon one step closer to that goal. It helped him learn about how artists and storytellers can create social change. And it gave him a chance to see firsthand the young people willing to work toward decarceration.

“Coming from where we come from, we thought that people really didn’t care,” Blackmon said. “To see just how passionate they are—we’re all students. We’re all working towards the same common goal.”