Brent Staples, AM’76, PhD’82, delves into history of racism with ‘extraordinary moral clarity’

Alittle over a year ago, University of Chicago alum Brent Staples was awarded the Pulitzer Prize—winning journalism’s top honor for his work as a New York Times essayist and editorial board member.

In his prize-winning pieces, Staples, AM’76, PhD’82, delved into the pervasive history of racism in the United States—whose legacy, he contends, we are far from overcoming. Bringing readers face to face with disturbing, largely overlooked chapters of black American experience, his editorials were, in the words of the Pulitzer board, “written with extraordinary moral clarity.”

They were also painstakingly researched. Staples brings a historian’s chops to his work, writing opinion pieces anchored in facts that might otherwise have gone forgotten except by historians. At UChicago he studied psychology, teaching for a few years before joining the New York Times Book Review as an editor in 1985. Five years later, he was named to the paper’s editorial board. Staples’ columns have been nationally syndicated, and his 1994 autobiography, Parallel Time: Growing Up in Black and White, won the Anisfield-Wolf Book Award. In April, he was named a fellow of the Society of American Historians.

Since receiving the Pulitzer, Staples has continued to publish columns that bring to light lesser known stories of racial injustice in this country. His conversation with UChicago Magazine has been edited and condensed. 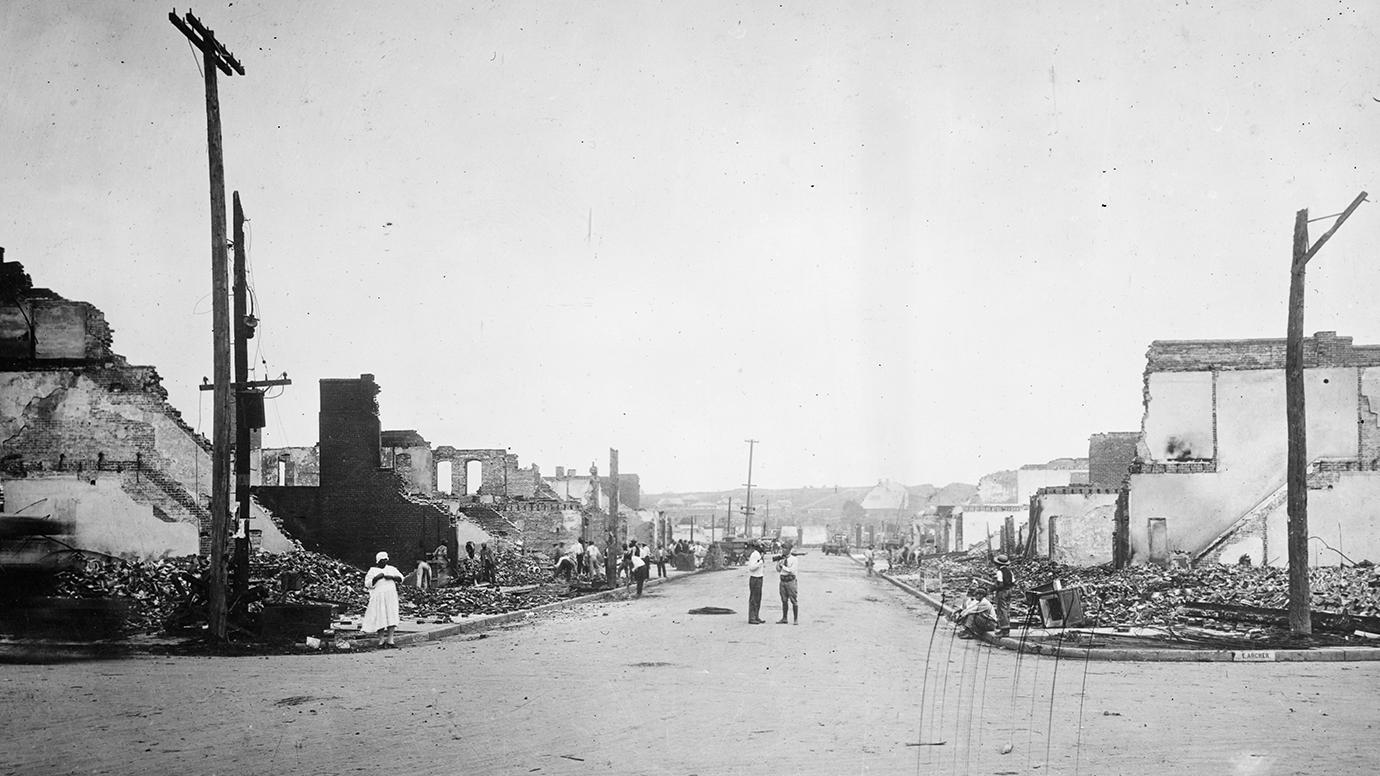 Events like the 1921 Tulsa Massacre, which destroyed the thriving African American community of Greenwood, have been "obscured by layer upon layer of willful forgetting," said Pulitzer-winning columnist Brent Staples, AM'76, PhD'82.

Photo courtesy of the Library of Congress

Your approach to newspaper column writing is distinct and powerful. How do these pieces fit into the larger arc of your career? Do you see a greater need for people to remember such history in the current political moment?

I went to Tulsa, Oklahoma, two decades ago to report on the state-sponsored commission that was investigating the most destructive episode of racial terrorism in U.S. history. The bloody conflagration now known as the 1921 Tulsa Race Massacre unfolded when the city empowered a mob of white vigilantes who murdered black citizens at will while reducing to ashes 38 square blocks of the prosperous African American community known as Greenwood. For 50 years afterward, the blood-drenched event that troubled the city’s sleep and defined its history was banished to the very margins of public awareness.

White families whose fathers, uncles, and sons had participated in the carnage enforced a civic silence. African American parents and grandparents kept quiet out of fear that speaking of the great evil might resurrect it. The white Tulsan who finally published a detailed account of the episode in 1971—enduring death threats along the way—was still living in the city when I stepped off the plane in 1999. He said something during one of our interviews—“History is the only education. Everything else is just training.”—that resonated with my inclinations as a writer and left a deep impression. The story of race and racism in the United States is obscured by layer upon layer of willful forgetting. Writing about this problem is by definition a forensic act.

A piece you wrote last October drew the most responses of anything you’ve written. What did readers say about it?

My essay “How Italians Became ‘White’” showed how the United States racialized southern Italians during the late 19th and early 20th centuries for being darker skinned, and they were ridiculed in white supremacist terms in the New York Times itself. The essay attracted a strikingly diverse readership, reaching somewhere between two and three million people. College-educated Americans who had no idea of the role racism plays in American immigration policy were surprised by the historical references—particularly the examples of anti-Italian and anti-black racism culled from the pages of the Times. Neighbors in the historically Italian section of Brooklyn where I have lived for more than 30 years stopped me on the street to discuss it.

Here and elsewhere these columns tell uncomfortable truths about the history of the newspaper in which they’re published. Did you have full support to talk about that?

There are no comfortable truths about the pervasiveness of racism in the United States. As the great-grandson of a black Virginian who narrowly missed being born a slave—and who died only a decade before I was born—I am irrevocably committed to speaking truth on matters of racial justice. Many years ago, during an argument with an editor, I enunciated what turned out to be a guiding personal principle. Before I dishonor the memory of my great-grandfather and my enslaved forebears, I said, I will quit this job and go wash cars.

Your essays bring to life figures like Frazier Baker and Madison Hemings (see “The Legacy of Monticello’s Black First Family”), to name just two, and transport us to their worlds for a time. Can you reflect on the importance to your work of bringing individual human beings and past moments to life in this way?

I take particular joy in helping to restore the dignity of figures like Madison Hemings, who was reviled by historians for saying what he knew from firsthand experience: that Thomas Jefferson was his father and the lover of his mother, Sally Hemings. The work of the historian Annette Gordon-Reed is inspiring in this way.

Are there ways in which your PhD work in psychology at the University has influenced your work as a journalist?

My reading in the philosophy of science—and the works of philosophers like Edmund Husserl, Michael Polanyi, and Paul Ricoeur—has shaped my ability to see beyond the surface of the world.

Which writers and journalists influenced your work the most, early in your career and now?

In stylistic terms, I was heavily influenced by the novelist Saul Bellow, EX’39, who was situated on the Committee on Social Thought when I was in my 20s. (I remember seeing him on campus soon after he was awarded the 1976 Nobel Prize.) I was fascinated by the way he grafted familiar people and news events into his novels, particularly Humboldt’s Gift, The Dean’s December and a few others.

Is there anything you’ve been reading lately that you would recommend?

Not long ago, I published a Times essay about Seneca Village, the 19th-century African American settlement that was destroyed to build Central Park. This essay is of a piece with articles I have written over the last two decades illuminating the largely forgotten story of African Americans who lived, worked, and died in early New York City. Twentieth-century Manhattanites who grew up thinking of New York as a “free” state were stunned when construction workers unearthed the African Burial Ground in 1991.

The event forced people to reckon with the fact that Gotham was an epicenter of the slave trade in the United States and a hostile environment for free black New Yorkers who saw it as a duty to assist fugitives from slavery like Frederick Douglass, who touched down briefly in Manhattan before fleeing into New England. The black Manhattanites who established Seneca Village in the 1820s were fleeing the murderous hostility they experienced in Lower Manhattan. I am reading deeply into their lives to get a sense of their fears and aspirations. Leslie M. Alexander’s African or American? Black Identity and Political Activism in New York City, 1784–1861 is a good place to start.

You’ve written that the only real hope of getting beyond racism in the United States is to talk about it, particularly about subtler forms of discrimination that persist today and that are the most deniable as innocent or accidental. How do you think we’re doing in that regard?

The country is in denial about the pervasiveness of racism. That denial is reflected in the way the traditional news media speaks of obviously racist behaviors euphemistically, using phrases like “racially charged,” “racially insensitive,” or “racially inflammatory.” Several years ago, I wrote an essay based on federal data showing that black preschoolers were far more likely to be suspended than their white counterparts for essentially the same behaviors. I concluded the piece by writing something like, “This is how racism works at school.” I stepped out of the office for a moment and returned to find that white editors had changed “racism” to “race.”

This sanitized formulation implied that the crushing mistreatment visited upon African American schoolchildren had descended from the heavens and fixed itself in place without human complicity. The sociologist Eduardo Bonilla-Silva critiques this kind of thinking in his widely cited book Racism without Racists. The white editors who changed the wording in my essay were operating under the familiar presumption that the term “racist” should be reserved for sheet-wearing Klansmen. I countered that, in terms of effect, there is no discernible difference between the conduct of a self-declared white supremacist who deliberately sets out to crush a black child’s life and the behavior of a self-declared liberal who achieves the same crushing effect while subscribing “unconsciously” to racist views of blackness.

—To read more of Staples’ responses, including his thoughts on the COVID-19 pandemic and racist stereotypes in medicine, read the full Q&A in UChicago Magazine.