How the politics of an armed group aligns with a government’s own ideological projects often dictates how the government responds and interacts with the group. Rather than straightforwardly respond to the material or organizational power of armed actors, the government may tolerate a group that it doesn’t perceive as threatening to its ideologies.

The findings come from a new book — Ordering Violence — written by Paul Staniland, an associate professor of political science. The title is being published by Cornell University Press and will be released Dec. 15.

Staniland started exploring the topic about nine years ago when he was working on a separate book. As a side project, he became curious about what was driving the outcomes of insurgencies in South Asia, realizing that the unrest was more complicated than what was being captured about relationships between non-state armed groups, insurgent groups, militias, pro-state paramilitaries, armed political parties, and the government.

“I expected it was either, they're fighting or there's a peace deal,” Staniland says. “Instead, there's a lot more live-and-let-live cooperation, low-level fighting that kind of goes up and down, cooperation between the government and non-state armed groups.”

Most of the way political violence is studied focuses on violence, he explains, with priority given to civil wars, insurgencies, or other armed unrest. But there are often instances when non-state armed groups aren’t actively fighting or killing. Research, Staniland says, needs to expand to areas with low levels of violence but where armed politics still exists.

Although his research focused on South Asia, he offered the U.S. as an example: There are non-state armed actors — such as those involved in the Jan. 6 attack on the Capitol — who are not actively attacking often, but they still have a presence in the country. “Politically, it matters a lot that they exist, even if they're not classical insurgent groups or entries to your standard civil war datasets,” Staniland says. “It's basically trying to expand our empirical understanding of where these non-state actors are, and what they're doing and whether they’re existing and doing politically important things or not, even without looking like your classic insurgency.”

For the book, Staniland did field work in South Asia and used historical qualitative data. He also received several grants for the work that allowed him to hire research assistants who would read the qualitative case studies. They then used a quantitative coding approach where they turned some of the findings into numbers to provide a sense of the variation that they were finding in the studies.

“It turned out that — as I suspected — a lot of armed groups are not locked into total intense warfare with the state,” he says. “They may be engaged in fairly low-level conflict. Or they're basically living on extended ceasefires with governments and they agreed mutually to leave each other alone. Or, in fact, they're activated in some way as a partner or a collaborator with governments.”

Much of these relationships are based on the government’s perceived threat of the armed groups. Staniland’s project asked what was driving some of the differences in the relationships between the government and armed groups — and there was no single, master explanation. Instead, he argues in the book that government ideologies as far as who counts as being part of the nation and what demands are considered dangerous or threatening play an important role in threat perception. 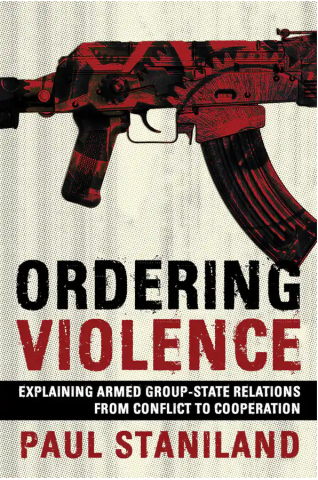 “You could have two groups that have exactly the same number of men, exactly the same number of guns, both have some support from a nearby state, but — depending on what kinds of specific political demands they're making and how that kind of interacts with the government's own ideological position — you could get very different responses,” Staniland says. One group may be seen as a huge threat that you can't do business with, who needs to be fought. Another group the government may decide it can cut a deal with, arrange a ceasefire, or simply ignore because they may be on the same page on certain topics.

These relationships can change across time and region: Different groups of people, different political parties, different militaries are going to have varying ideologies that may or may not tolerate certain non-state actors. Even within the U.S., groups that one political party may tolerate or even embrace won’t be tolerated by another party or administration.

Staniland’s book points to a gray area that needs to be considered when mediating deals between governments and non-state actors. There are potentially numerous ways to stabilize or at least manage conflict that don't require full-fledged peace deals. There’s a whole spectrum between conflict and cooperation, Staniland says.

“Maybe sometimes it's better to push for a ceasefire — even if it's probably just going to sit there for years without fully resolving the political issue at stake — rather than pushing for a very hasty or underbaked peace process that won’t really solve anything, and may make the violence actually worse,” he says. “There's a lot of gray, a lot of in-between space that we all need to be a little more comfortable thinking about.”

Another takeaway from the book, he says, is taking seriously the historical and ideological roots of how governments perceive threats. Take, for instance, the military in Myanmar and its thinking about politics: It launched a coup and is now fighting against numerous insurgent groups in the last year. It will appear on its face to much of the world as a disastrous and counterproductive policy, but understanding the sources of the coup requires understanding how that military has come to understand itself and its political goals and the political threats that it faces. (However, understanding the worldview doesn’t rationalize, or justify, or excuse the actions.)

We can’t assume everyone sees the world the way we do, Staniland says, but instead we must take seriously — while not rationalizing away — the political worldviews of the various actors at play.