A New Book on Tamil Cinema Offers Anthropological Answers to the Question, What Is an Image?

Author and UChicago professor Constantine V. Nakassis looks beyond the screen to consider presence and representation in the South Indian films.

Onscreen/Offscreen, the second book from Constantine V. Nakassis explores the politics and being of filmic images, answering the question of “What is an image?” by focusing on the ontological politics that take place on film sets, in theater halls, and in the social fabric of everyday life in South India. The book is based on more than a decade of Nakassis’s ethnographic fieldwork in the South Indian state of Tamil Nadu.

The research centers on one of the foundational topics in film studies, which comes from an essay by French film critic and theorist André Bazin, Nakassis says, around the question of what Bazin called the ontology of the photographic image.

“In this book, I'm engaging with Bazin by engaging with Tamil film materials,” says Nakassis, an associate professor in the Department of Anthropology.

In the book, Nakassis reposes the question of the image’s being anthropologically, focusing not just on films as text to analyze, interpret, or read, but also by trying to understand the films within a social context. Onscreen/Offscreen, he says, has ethnographic research about what goes on on film sets, interviews with people who make and watch films, along with his own experience and research in theaters and other exhibition spaces. “I'm not just trying to understand the films in the abstract, as independent objects that we could just look at or “read.” I'm also trying to understand the social context of these films and to think about the way in which images manifest but also mediate all those social relations that are part of the life of an image, from its production to its circulation and reception.” 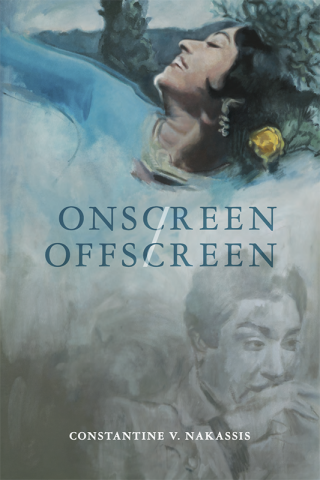 The book is broken into four chapters, which are split into two halves that variously explore questions of presence and representation.

“There's a tension between these two kinds of ontological modes of the image, and I'm interested in the politics around that tension; in particular, the ways in which the politics around the question ‘What is an image?’ is the basis under which some images come to performatively act, while other images don't and simply represent.”

While the book is in conversation with the ontological question posed by Bazin, Nakassis says the goal is to reach out to an audience that includes those in film studies, cinema & media studies, and anthropology — more specifically, media anthropology and linguistic anthropology.

Onscreen/Offscreen was published by University of Toronto Press and is also available as an open-access PDF.