In half-century at UChicago, scholar made ‘foundational’ contributions to understanding of language

Prof. Michael Silverstein, a leading University of Chicago anthropologist who made groundbreaking contributions to linguistic anthropology and helped define the field of sociolinguistics, died July 17 in Chicago following a battle with brain cancer. He was 74.

The Charles F. Grey Distinguished Service Professor of Anthropology, Linguistics and Psychology, Silverstein was known for his highly influential research on language-in-use as a social and cultural practice and for his long-term fieldwork on Native language speakers of the Pacific Northwest and of Aboriginal Australia. Most recently, Silverstein examined the effects of globalization, nationalism and other social forces on local speech communities.

“Over a half-century at the University of Chicago, he produced a body of work that fundamentally changed the place of linguistics in the field, with foundational contributions to the understanding of language structure, sociolinguistics and semiotics, as well as the history of linguistics and anthropology,” said Prof. Joe Masco, chair of the Department of Anthropology. “His erudition, sense of humor, love of scholarship, of teaching, of conversation and substantive debate is legendary and helped establish the intellectual strength of UChicago in all the many different fields of which he was part.”

Born Sept. 12, 1945, in Brooklyn, New York, Silverstein earned his bachelor’s degree and doctorate from Harvard University. He was invited by the Department of Anthropology to teach Language in Culture in fall 1970 and then hired as associate professor with tenure in 1971. He was promoted to professor in 1978. 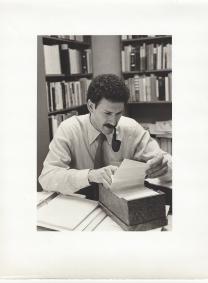 “Language in Culture, which he taught continuously 1970-2020, offered generations of students in multiple fields—Anthropology, Psychology, Linguistics, Human Development, among others—a Rosetta Stone to interpret a 2,000-year history of ideas about the relationship between language, culture, and social interaction. It inspired numerous books and reshaped the humanistic fields concerned with speech as a form of social action. Students who went on to become philosophers, sociologists, anthropologists, and social activists all drew primary inspiration from this course,” said Robert Moore, PhD’00.

A prolific writer of essays, articles and reviews, Silverstein’s books included Whitney on Language, Natural Histories of Discourse (with Greg Urban), Talking Politics and Creatures of Politics: Media, Message and the American Presidency (with Michael Lempert). He was active in professional service across UChicago, including as a member of the Social and Behavioral Sciences Institutional Review Board for Research with Human Subjects from 1997-2000 and 2001-2005. He served as board chair from 2005-2012.

In 2019, Silverstein gave the Nora and Edward Ryerson Lecture—a recognition of his lasting contribution to the intellectual life of the University of Chicago.

“What he strove to understand, and what he clarified in groundbreaking ways, was a systematic way to understand what fundamentally makes human societies function: communication in all its guises. He did so with incisive observation, brilliant analysis and with his unique wit. His ideas are, quite literally, the very language through which the social study of discourse is thought,” said Assoc. Prof. Constantine Nakassis. “But what I will remember most of Michael was how generous he was. He built worlds—institutional worlds, scholarly worlds, intellectual worlds—and he invited you to participate in them, grow them, and make them your own. In doing so, he lifted us up.”

Silverstein was named a MacArthur Fellow in 1982. He held a Guggenheim Fellowship in 1979, was elected to the American Academy of Arts and Sciences in 1991, and to the American Philosophical Society in 2008. In 2016, he was interviewed for APS’s “Talking About Things” series, discussing one of the journals of explorers Meriwether Lewis and William Clark. In 2014, he received the Franz Boas Award for Exemplary Service to Anthropology; in giving him its highest award, the American Anthropology Association described Silverstein as “a virtual force of nature in the discipline.”

"To learn from Michael Silverstein was to stand at a pivotal point in the history of social thought, and to witness how, right in front of your eyes, he generated and refined ideas for the formation of a future discipline. He taught us how to study and explain the sinews of social life, to coherently connect the foundational questions of anthropology, sociology, linguistics, and psychology. And he did so with joy and merriment that were impossible to resist," said Nick Harkness, PhD'10.

He was also honored at UChicago with the Faculty Award for Excellence in Graduate Teaching, which he received in 2000. In an interview at the time, Silverstein credited his students with influencing his work in his long career.

“We have the best students in the country here, and their interest, their engagement, is what keeps me interested in being a faculty member at the University,” he said then. “I have been very engaged always with the questions they raise in class and in conversations. My own published work is sprinkled with references and footnotes of observations that students have made during these discussions.”

“Michael was a man known for his enormous energy, erudition, precision and charm. Less recognized was his work behind the scenes to make knowledge happen by and for all of us. His conceptual approach radically redefined the place of language in social and cultural life; it was first of all brilliantly and excitingly his own,” said Susan Gal, the Mae and Sidney G. Metzl Distinguished Service Professor. “Yet scholarship is indispensably a collaborative effort, a continuing, creative conversation among students and colleagues. His practice matched this teaching. That is why Michael was a devoted institution-builder, a tireless organizer of lasting infrastructures for critical, ethical discussion.”

He is survived by his wife, Mara Tapp, and children, Ariella and G.

“The University gave me many things, but the very best was my husband,” said Tapp, AM’77. “Michael and I met through the University, where my parents had also taught, and of which I am an alumnae and former employee. The U of C and Chicago were his destinations of choice because of their integrity, which he worked hard to protect. His kindness, dedication, passion and generosity were equally present with his family. He was an adoring, supportive and equal partner, a devoted and nurturing father. He was our everything. We are so grateful for the many acknowledgments of Michael’s contributions to his fields, his colleagues and his students.”

A public memorial will be announced at a later date, when social gatherings are possible.

The Division of the Social Sciences is establishing the Michael Silverstein Memorial Fund to support and encourage doctoral students of Anthropology.

Details about this fund and how to contribute to it are forthcoming. Should you have questions regarding this fund in the interim, please be in touch with Yasmin Omer  (yasminomer@uchicago.edu or (773) 702-4530).