Mark Bradley on what’s new and notable in SSD

Catching up with the professor, deputy dean, faculty director, and editor as he highlights recent accomplishments within the Division.

In conversation with writer Sarah Steimer

Mark Philip Bradley’s email signature is notably long: the Bernadotte E. Schmitt Distinguished Service Professor of History, Deputy Dean of the Division of the Social Sciences, Faculty Director of the Pozen Family Center for Human Rights, and Editor of the American Historical Review. It’s a healthy sampling of the Division’s reach.

While those titles feel distinct from each other, Bradley sees the value of allowing his work across those areas to influence and inspire everything he’s involved with. His roles at AHR and the Pozen Center are ongoing, while his position as Deputy Dean is coming to a close. Here he walks us through some of the exciting developments in each arena, including a redesign of the journal, a new Human Rights major, and the encouraging momentum behind DEI in the Division.

Let’s start with your role as the editor of AHR: I know there was just a redesign of the journal. What prompted the redesign and can you tell me a little more about the changes? 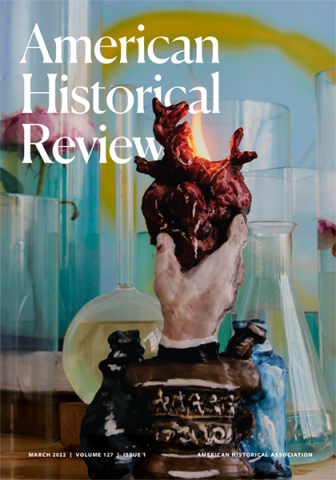 This is the first redesign of the journal in 50 years, so it has been some time since we stepped back and thought about not just how the journal looks but also the kind of work it is doing in the world.

Like almost all scholarly journals, the American Historical Review publishes articles and book reviews and the redesign takes those vital commitments forward in what I hope are visually arresting ways. But we have also created a new experimental and collaborative space in the middle of the journal called the AHR History Lab. The idea is to open up the pages of the AHR beyond the article and the monograph to the many ways of doing history in our present moment, whether in the form of the digital humanities, intersections between history teaching and research, or through public-facing interventions. I am keen to find pathways for the journal and our readers to engage with and learn from practitioners of history who are creating new knowledge in and outside of the academy, including community activists, public historians, archivists, museum curators, visual artists, composers, and writers. In doing so, I hope the AHR can model an inclusivity for the discipline that mirrors the diverse lives and experiences of practicing historians in the early twenty-first century.

Just to give one example of what the Lab is about: We are working with Odeuropa, a European-based collective that recently won a €2.8 million grant to investigate early modern smellscapes. This cross-disciplinary team of historians, computer scientists, chemists, scent makers, curators, and heritage policymakers is working to develop novel methods for collecting data about historical smells from text and image collections and to foster new forms of olfactory research and public exhibitions. Over the course of this year, Odeuropa will offer a series of interventions in the Lab around questions of smell and the digital archive; interdisciplinary challenges in recreating historical smells and their dissemination; the place of smell in museum practices; and the policy dimensions of recognizing historical smells as forms of cultural heritage. They will also create the first peer-reviewed scratch-and-sniff card for the journal!

So you’re trying to encourage a more collaborative process with the Lab?

That's right. Generally, we do single-author pieces for articles but we are hoping to do more digital humanities-based articles too — and those are necessarily collaborative projects that will sit between print and digital space. We are developing a more robust digital platform for the journal so when projects need to spill outside of the printed page we can be sure to accommodate them.

How long have you been editing the journal?

I’ve officially been the editor since last August, although my appointment happened almost two years ago — so this redesign process has really been going on for almost two years. Our partners in this effort have been the New York City-based design firm Pure + Applied, who have worked for clients such as the Library of Congress, the Museum of Modern Art, the Smithsonian, and the New York Public Library. Among other things, they have helped us to realize our larger goal of opening up the pages of the AHR to more diverse approaches to historical scholarship by selecting new typefaces for the journal designed by typographers of color. For instance, we are now using the young African-American typographer Joshua Darden’s Freight, a minimalist sans serif type that will quite literally frame many of the interventions in the new AHR History Lab.

Do you have any other big goals moving forward as the editor of the publication?

Expanding the geographies represented in the journal is an important long-term goal for us. Through much of its history, journal content has focused on histories of Europe and the United States. We want scholars working in Latin American, Middle Eastern, Asian, and African history to see the AHR as a place to put their work, too. Similarly, we hope to feature more work on Indigenous histories. We are making progress there, but it is a long process and one that will require sustained effort over time.

You’re also the faculty director of the Pozen Center — what are some exciting updates there?

We will have a human rights major at the University of Chicago for the first time starting in September. The Human Rights Program was founded at the University of Chicago 25 years ago — this fall we'll be celebrating that anniversary. We’ve had a strong curricular and co-curricular footprint over time with a minor, a human rights sequence in the College core, a study abroad program in Vienna, and a program of fully funded internships for College and Crown students at human rights organizations in the United States and abroad. But to have a full-on major is a big move for us.

It's been very exciting to see student response to the announcement of the major. We thought the major would likely start small, and then grow. But we have as many as 40 students who seem quite determined to become human rights majors next year. We may in fact have enough that a couple of them could actually graduate with the major in June 2023 given all the human rights coursework they have already done.

The major is quite distinctive intellectually. We are one of only two majors in the College that build in an experiential dimension to the curriculum. All of our majors will be required to do a summer field placement with a human rights organization, placements we are committed to funding with the help of the Pozen endowment. We are also going to have a two-track capstone pathway. One will be the more traditional thesis project that you typically do in departmental majors. The other will allow students to deepen their work out in the world and bring it back into the classroom. A student whose summer placement might have been with Amnesty International in London, for instance, could build on that work by writing an advocacy paper or developing a website or podcast as their capstone project. We will be the only major in the College where you can bring your experiential work back into the university in that way.

Anything else that’s being planned for the 25th anniversary this fall at the Center?

We're bringing an amazing group of ten leading interdisciplinary scholars and practitioners of human rights to campus in October for a major symposium on the future of human rights. The next day all of those visitors will go out into departments where they will be meeting College students, MA students, doctoral students and faculty. They will also present in seminar-style some of their own work in progress. The idea there is to recognize and further build out our relationships with departments and schools across the university while the big evening event is intended to convene the wider university community on the challenges facing the human rights project today.

Lastly, you’re closing out your role as deputy dean of the Division. What are you most proud of from your time serving in this position?

It is a remarkably collaborative group working in the Dean's office. Amanda set that as the tone for the office, and it has been great. We've been able to accomplish some important things for the Division because we've been able to work together so effectively.

Most of the work that I've been most involved in has been around the issues that you don't solve in a five-year term, but rather are ongoing issues. Reforms of graduate education in the Division has been one part of my portfolio. As the new graduate funding model was coming down, I led a faculty committee to think about the state of graduate education in the social sciences and we used those findings to implement new approaches to pedagogical training and mentoring in the Division. We were also able to grow the Social Science Teaching Fellows program to provide additional postdoctoral support for our recent PhDs. That has been especially important during these pandemic times.

I was also happy to play a role in the Division’s DEI efforts. Over the last several years we have done some important relationship building with faculty and students from HBCUs. We are part of a Mellon-funded program to host HBCU faculty at the Division’s research centers. We have built a local partnership with Chicago State University, whose students are now a part of the Division’s Summer Institute on Social Science Methods. I am also delighted about the recent establishment of the new Department of Race, Diaspora and Indigeneity and the intellectual energy it will bring to the Division. That accomplishment is the result of sustained and hard work by many of the Division’s faculty, and it is great to see.

You're involved in so many different parts of the Division. How have those roles complemented each other or even maybe helped broaden your own view of some of the different issues that you talked about?

I think the cross-pollination of it all has been just terrific for me — things that I learned through my work with the Division that I could bring to the Pozen Center, and vice versa. But it has also made an impact on me as a scholar. Sometimes people think about these kinds of administrative roles as divorced from the scholarly work that we do. I'm somebody who welcomes interdisciplinary encounters, and in my work at Pozen and in the Division there have been so many wonderful opportunities to really get to know our faculty and students and to learn about commonalities in our work that I didn't necessarily know before.

Those relationships have led in all kinds of important intellectual directions for me. For instance, this year along with three faculty from Humanities I founded a new workshop on the global South, an experience that has been generative for me as I work to complete my current research on the intellectual history of the global South. These are professional relationships and friendships that I will carry with me for a long time and I am grateful for them.