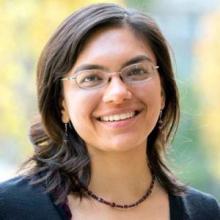 Manasi Deshpande’s research focuses on social insurance and public assistance programs, and how to design them optimally. With funds provided by the William T. Grant Scholar program, Deshpande, an assistant professor in the Kenneth C. Griffin Department of Economics, along with Rebecca Dizon-Ross, an associate professor and Charles E. Merrill Faculty Scholar at Chicago Booth will investigate whether families’ expectations of children’s eligibility for disability benefits in adulthood changes their investment in the child’s human capital.

“We are interested in understanding how providing information on children’s eligibility for benefits in adulthood changes families’ behavior,” Deshpande explains. “Do they make different decisions when it comes to schooling, healthcare, or training?” Deshpande’s research project will focus on this central question for the William T. Grant Foundation.

Deshpande and Dizon-Ross anticipate using multiple data collection methods. “We will measure the effectiveness of the intervention using the take-up of the resources that we offer to families as well as surveys, interviews, and administrative data. We plan to use surveys to measure behavior such as how long children and parents spend on schoolwork and interviews to understand the thought processes of the youth,” says Deshpande.

A focus of the study is to find out how families change their behavior based on the information provided. “If parents find out ahead of time that their child is not likely to continue receiving disability benefits in adulthood, do they invest more in the child’s schooling? Do the children have better attendance and grades? And do these investments actually lead to better outcomes?” Deshpande asks.

Deshpande and her team will be tracking families at every step in the process to find exactly where expectations and behaviors change. “It is possible that their expectations may not change with the new information or they may not invest in schooling because they don’t think that will help their child in the labor market,” explains Deshpande. “It’s important to measure every step in the process from information to outcomes.”

Before her graduate studies, Deshpande worked for both The Hamilton Project at Brookings Institution and the White House National Economic Council. She worked on a wide variety of economic policies in these positions and developed a particular interest in the social safety net.

“I was surprised at how little empirical evidence there was on the costs and benefits of different social programs,” says Deshpande. This experience pushed Deshpande to better understand American social insurance programs through an economic and labor market framework.

Deshpande’s Ph.D. in Economics from MIT refined her interests further. “MIT had a focus on finding important open research questions and addressing them with convincing empirical methods,” says Deshpande. This mindset still frames Deshpande’s research on designing an optimal social safety net for the public good.

Arriving at this Research Question

Coming to the University of Chicago has allowed Deshpande to thrive as a teacher and researcher. “At the University of Chicago, there is a spirit of both understanding problems as well as solving them. The academic mindset here places emphasis on clear thinking and reasoning. There is a strong belief that empirical research is most informative when it is testing theory so that the results can be used in other applications,” says Deshpande.

Deshpande’s current project was rooted in work she did in 2016, which was published in a paper titled “Does Welfare Inhibit Success? The Long-Term Effects of Removing Low-Income Youth from the Disability Rolls” in the journal American Economic Review. The research followed individuals who were removed from Supplemental Security Income (SSI) after turning 18 years old and compared their outcomes to those who continued receiving benefits.

“I found policy variation that allowed me to compare young adults who were removed from SSI or stayed on for essentially random reasons. Twenty years later, I could see their labor market outcomes,” explains Deshpande. The individuals who were removed from benefits had lower income in adulthood. While they earned more than those who stayed on SSI, their average annual earnings were only about $4,000 per year and they did not experience any earnings growth over time.

“In the context of that paper, the policy change was sudden and those that were removed from benefits were taken by surprise,” Deshpande explains. “One thing that kept coming up in my talks was whether they would have behaved differently if they had known that they would be removed ahead of time. Rebecca and I decided to take on that question.” Deshpande’s current proposal for the William T. Grant Foundation seeks to answer this question.

The William T. Grant Scholars program invites applications each year from scholars who want to do research to improve the lives of young people in the United States. Deshpande was selected as one of 10 finalists based on her proposal and was invited to interview for the award in New York City in February. “The application and interview process itself was rewarding because it forced me to think about what I wanted to get out of this research and how it connects to my long-term goals. Of course, I was thrilled to learn that I was selected as a scholar, both because I’m excited about this research and because I’ll get to learn from a new community of scholars in different fields,” says Deshpande.

The William T. Grant Program also requires an intensive and detailed mentoring plan. Deshpande’s mentors for the William T. Grant Scholars program are Dr. Ariel Kalil, Professor at the Harris School of Public Policy and Director of the Center for Human Potential and Public Policy (CHPPP), and Dr. David Meltzer, Fanny L. Pritzker Professor of Medicine, chief of the Section of Hospital Medicine, and director of the Center for Health and the Social Sciences. “Mentorship is an important part of this program, and fortunately I have some of the greatest minds in these areas right here at the University of Chicago,” Deshpande says. “In Rebecca, I also have an incredibly thoughtful and creative co-author who is an expert in survey design and randomized controlled trials.”

The Empirical Power of Understanding Costs and Benefits

In her course Inequality in the Social Safety Net, Deshpande explains to students that the politics surrounding social programs are often “characterized by extremes, with one side seeing only perverse incentives and the other side seeing only benefits. The truth is likely somewhere in the middle, and empirical research is essential to compare costs and benefits for each program.” Deshpande believes policy decisions “should be based on empirical analysis guided by theory, not theory alone.”

Deshpande emphasizes that work like hers helps these discussions move beyond the ideological and political realm. She explains, “The goal is to figure out how to design the social safety net optimally. What are the costs and benefits and how can we balance them?”