The Art of Ethnography

Teaching Fellow Sheha Annavarapu has created a platform for sociologists to share the anecdotes and imagery from their research journeys.

In ethnographic studies, sociologist frequent encounter myths, stories, and images that can inform their research and perhaps inspire their imagination. But in a final paper or book, these stories often get set aside to make room for all of the facts, hypotheses and academic conclusions. 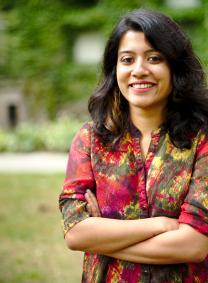 “And thus, the most interesting and provocative parts of ethnographic writing are discarded in service to academic journals that demand a clear intervention filling a stated gap within the literature or the creation of neat typologies.”

This challenge, as described by Annavarapu on, Ethnographic Marginalia, a project website where she and co-creator Alex Diamond, a doctoral candidate in Sociology at the University of Texas at Austin, aim to capture some of those stories and images and share them with the world.

Through the site, they hope to foster community in the ethnography space, through dialogue and the sharing of stories, images, and techniques. “We are interested in the raw material of ethnography and we aim to provide space for critical, compassionate, and collective reflection on what it means to do ethnography, and the travails, the perils, and the joys of this craft.”

Annavarapu came up with the idea while working on her own dissertation about road safety and driver culture in India. While doing research she found herself spending time in predominantly masculine environments, where she occasionally felt unsafe. “I was caught between being an ethnographer and being a women who was vulnerable in that space.”

That prompted her to write a few non-academic essays about her experiences, and people responded to them very thoughtfully. She then realized that there were hardly any avenues for sociologists to publish non-academic ethnographic essays. That led her and Diamond to launch an Ethnographic Marginalia podcast, which is a special series on the New Books Network.   Interviews include Dr. Deborah Thomas, Professor of Anthropology at the University of Pennsylvania discussing, Tivoli Stories, which is based on the 2010 police and military incursion in a West Kingston community that left at least 75 dead; Dr. Caterina Fugazzola of the University of Chicago discussing her research on the contemporary tongzhi (LGBT) movement in the People’s Republic of China; and Javier Auyero, professor of sociology at the University of Texas at Austin, discussing his work studying marginalized communities in Buenos Aires.

The podcast gives researchers and authors a chance to share the stories that otherwise don’t get told. “We discuss… the messy pleasures and tricky feelings of ethnographic practice in and of itself,” Annavarapu says.

The success of the podcast helped Annavarapu and Diamond decide to launch the Ethnographic Marginalia website.

Methodological Appendix features essays and reflections on fieldwork, and the dilemmas and unexpected moments that shape those experiences.

The podcast, in partnership with New Books Network.

The site has already received compelling submissions from researchers around the world, including essays, poems and beautiful pictures that never made it into their academic writing. “There has been so much enthusiasm, it’s touching,” she says.

When Annavarapu isn’t doing research and hosting podcasts, she teaches several classes, including Sex and Gender in the City, Urban Life in South Asia, and Life In Transit: Transportation and Society. After the 2021 Spring Quarter, she will move to Singapore to join her new role as Assistant Professor in Urban Studies at Yale-NUS College.

Annavarapu notes that a lot of sociologists still worry that doing public sociology has absolutely no value on the job market, but she disagrees.  Her work on the website and her experience with podcasting helped her when interviewing for the Yale NUS position. “They were really excited about what we are doing,” she says.

It also gives ethnographers a way to engage, and to share the stories that have such an impact on their lives, and their experiences as researchers. “If you feel joy in what you are doing, it’s never useless.”